Next stop on our journey through time is Pharaoh from 1999. In this game, you become the administrator of various cities in ancient Egypt. This is the 4th game in the series made by Impression Games and published by Sierra Entertainment. This game also has an expansion called Cleopatra: Queen of the Nile that brought in some interesting monument projects to the game.

Here is the main activity of the game:

So what makes Pharaoh unique? The signature of this game, the way I see it, is the monument projects. These beasts take a tremendous time to create. The pyramids in my screenshots were built for so long that I finished shaping my city to the form I wanted and I STILL had to speed up the game and wait for around 30 more years for construction to be done. Actually, I started the medium pyramid in the middle of the playthrough and it got finished faster than the big pyramid… So, where is the fun? Surely not in watching this snail race? I find that the pleasure is hidden in building your city around these giants. That way, once the great projects are finished, you have a prosperous city at their feet for that perfect screenshot. Trust me, the satisfaction payoff is huge. 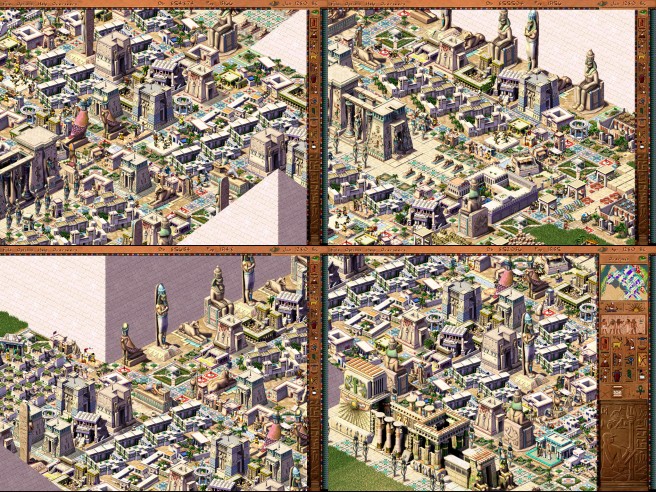 Another thing that I enjoyed while playing Pharaoh, were the festivals dedicated to the gods. The Caesar didn’t have a visual feedback for these activities, as far as know, while later games after Pharaoh changed their approach to religion. There is a sense of accomplishment in watching the festival square flooded with entertainers, priests, and scribes when you know that your first festival only had a couple of priests and a juggler. It’s a great way to show the player the progress and the growth of their city, as every new temple, stage, school, and a noble house sends a person to the festival.

While I love Zeus for its aesthetics, the main reason I love Pharaoh is the mechanics. The mechanics that got kinda butchered in Zeus. The center of all these management games is to keep increasing the population while fulfilling their needs. And the complexity of this task is far more superior in the Egyptian edition then it is in the Greek edition. Here is a graph I made to show the amount of mechanics in two games: 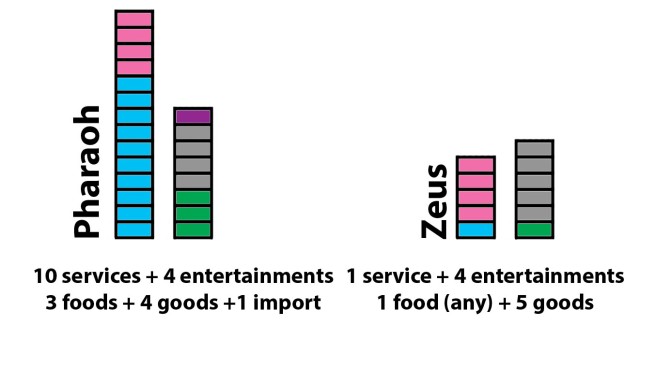 I guess no elaborate explanation needed. The number of features that were involved in the housing mechanics was dramatically cut. I wonder what happened there? While looking into this, I got curious to see as to how many requirements the houses in Ceasar have had. Imagine my shock when I saw this:

Turns out that Caesar was even more complicated than Pharaoh, even if it was just by one service. And in Caesar, you can’t control the flow of your walkers because there are no roadblocks! It must have been a pain to achieve the highest house level.  Pharaoh considers a similar feat to be an achievement. Anyway, I’m not going back to Caesar, that’s for sure…

View all posts by Gleb K.